By Jack Zenger and Joseph Folkman 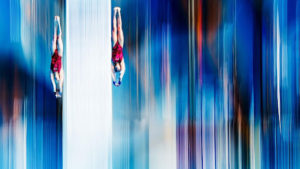 A common stereotype is that men have a tendency to be bolder than women. And  numerous studies have shown that male business leaders do tend to take more risks. But  looking through our database of 360-degree assessments from 75,000 leaders around  the world, we noticed that on average the women were bolder than the men.

We created a “boldness index” out of seven behaviours we commonly assess. (If you  want to take our assessment based on this index, you can.) Because these are among  the behaviours that we assess in our routine leadership assessments, we think they may  be more relevant to real managers than studies that assess “risk” either in lab situations  or in purely financial terms.

When boldness is defined this way, women on average rank in the 52nd percentile of  boldness, a few ticks higher than the average men rating of the 49th percentile. (It’s  important to note that because of the imbalanced gender ratio of senior executives, there  were nearly twice as many men in our data set as women.) While that doesn’t seem like  a huge difference, it stood out to us because “men take more risks” is so ingrained in  social science.

We wanted to dig a little deeper, so we looked how this gap played out in different  business functions. We saw that different functions had very different “bold scores”  — both between functions and between men and women in the same function. Not  surprisingly, the sales function showed the highest bold score, while engineering and  safety showed the lowest. In every function, the women leaders had higher boldness  ratings on average than the male leaders.

We noticed that the functions with the largest gender gaps were R&D, facilities, IT, and  manufacturing — which also tend to be men-dominated functions. To quantify this, we  looked at the percentage of men and women in each group and then correlated that  with the difference score between men and women on bold leadership. We found a 0.45  correlation, which is fairly strong (as a reminder, a correlation of 1 would be perfect  correlation; a correlation of 0 would be no correlation). We then created the chart below.  It is easy to see in that in women-dominated functions, such as HR, women’s average  boldness was not much different from men’s. Where the percentage of men was much  higher, however, bold behaviour increased for women. 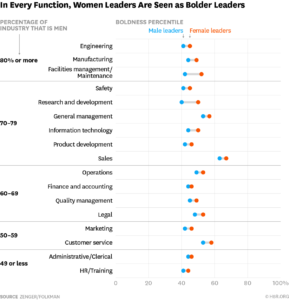 It would seem that to be a younger woman in a men-dominated function requires a fairly  bold personality — a willingness to challenge the status quo, push harder for results, and  do something out of the ordinary. So to return to our original question, are women bolder than men? Probably not in the general population. But the ones who succeed in  business, especially men-dominated fields, may have to be.